DC24 Dyson Ball is a small, slim, lightweight upright that sits on a ball. Conventional cleaners with fixed wheels can only move in straight lines; they’re not designed to steer. But the new Dyson DC24 sits on a ball and turns with ease.

Dyson engineers have replaced wheels with a ball to give DC24 greater manoeuvrability. The motor sits inside the ball, making it lighter in hand and even easier to steer. With the turn of the wrist DC24 responds by swivelling its head to nip around obstacles like furniture, children and pets around the home. 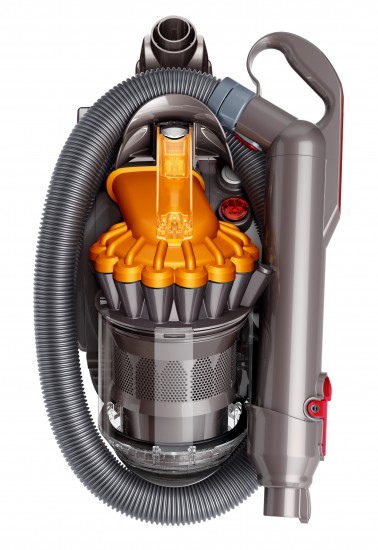 DC24 compresses by one-third of its height when it’s not in use so it’s easy to store. Its motorised brush-bar captures even ground-in dirt and pet hair, so it has the all-round cleaning performance of a full-size Dyson.

DC22 Dyson Baby is a compact cylinder, one-third smaller than other Dyson cylinders. Its telescopic wand packs down and its hose wraps neatly around its body for tidy storage. Baby uses the most advanced Dyson cyclone technology to capture more microscopic dust than any other cyclone.

Like all Dyson machines, Dyson Baby doesn’t rely on bags or filters to capture all the dust. Instead patented Root Cyclone™ technology spins dirt from the airflow, so it doesn’t lose suction. Dyson engineers have taken this technology one stage further and developed core separator technology to capture even more microscopic dirt. Dirt now goes through three stages of separation:

Hygienic and allergy friendly: Both machines have a trigger bin-emptying system. This means with the press of a button, all the dust and dirt can be emptied directly into the bin.

The air emitted from a Dyson vacuum cleaner has up to 150 times less bacteria, mould and allergens than the room’s ambient air. Clean and allergy friendly. Robust: They may be compact, but they are tough. Dyson engineers have put these vacuum cleaners through their paces to make sure they are up to the most rigorous cleaning challenge. Not only are they made from the toughest materials (the bin is made from the same material as riot shields) - they have been dropped down stairs and rolled over 1,000 miles (1,600km) – that’s as far as London to Helsinki as the crow flies.

No bags, no extra costs: Unlike bagged vacuums which keep costing, Dyson machines have no bags – and come with lifetime washable filters – so no extra running costs.