Miele: The Bag Is Back

Miele continues to deliver on its promise of Better Living by offering the most effective vacuum system on the market today. The Miele patented AirClean Filter-Bag™ plus Sealed System® ensures improved indoor air quality, making homes healthier and cleaner. Tested by an independent laboratory* the proprietary cleaning system captures and retains over 99.9% of harmful pollutants – an average of 21 times more than popular HEPA-filtered bag-less machines. On average, the leading bagless HEPA-filtered vacuum emitted over 175,900 lung-damaging particles per minute during comparative testing.

“Bagless vacuums equipped with only a HEPA filter, and not Sealed System® technology, do not effectively prevent particle emissions during vacuuming,” said Nadine Hanselmann, Marketing Manager for Miele. “Additionally, harmful, toxic matter is released into the air when bagless vacuums are emptied into the trash, creating noxious air indoors.” 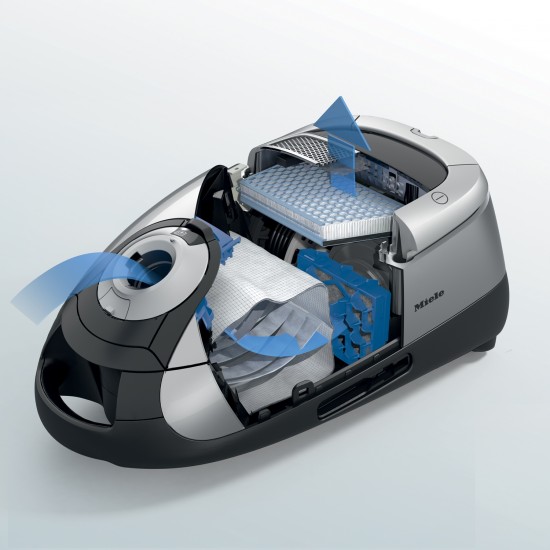 According to the Sierra Club and the Environmental Protection Agency, “exposure to indoor air pollutants (such as carcinogens, combustion products, irritants, and environmental tobacco smoke, or ETS), contributes significantly to an individual's total pollutant exposure and is a major source of health problems and preventable deaths.” Most Americans spend 90% of their lives indoors. The EPA data suggests that pollutant levels are two to five times greater than outdoor air. Vacuum cleaners have been identified as contributing polluters.

When using any vacuum without a Sealed System or one without a proper filtration system, carbon is emitted from the machine. This fine particulate matter, invisible to the naked eye, is left suspended in the air we breathe. Particles measuring 0.3-0.5 microns have a greater likelihood of being inhaled into the lungs, where they are absorbed into the bloodstream or remain embedded in lung tissue. While your floor may appear cleaner, the air you take in may not be.

“Bagless vacuums equipped with only a HEPA filter, and not Sealed System® technology, do not effectively prevent particle emissions during vacuuming,”

A common misconception is that bagless vacuums are more environmentally-friendly than those requiring bags. Given the data, bagless vacuums significantly contribute to infusing the air with harmful particles, suggesting it is not at all hygienic to employ these machines. Additionally, many bagless machines require more frequent emptying than those with bags, further contributing to poor indoor air quality.

Miele AirClean Filter-Bags™ are made of a durable, nine-layer electro-static fiber which grabs fine particles that can leak through lesser quality bags. An Auto-Sealed™ collar, which fits snugly around the bag, is made of durable plastic that snaps shut when the bag is removed, eliminating the possibility of dust escaping, thus the Miele Sealed System®. Some are concerned about the impact of vacuum cleaner bags on the environment. Given the potential health risks associated with bagless vacuums it would appear the trade off is a worthy one. To prevent illness and the spread of unhealthy debris, it is critical to employ protective bags with a Miele AirClean™ Sealed System®. “Use of a well-engineered vacuum, which precludes harmful particles from launching into the air, is a matter of health and hygiene,” said Susan Goldsmith, Managing Director of IBR.